While at an IT networking event, one of my team members was given a chance to watch a series of first impressions happening all around her. A young man caught her eye, and she watched as he made an impact everywhere he moved through the event. He had prepared well for the opportunity, but fell slightly short on nearly every criterion on my lists for making a great first impression. There was one perfect element that made him stand out, and held the attention of every hiring influencer in the room. Can you guess what it was? 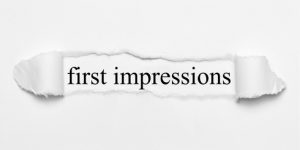 Well dressed. Yes, his suit was pressed, his tie matched his socks, and his shoes were shined. That was true of a sea of young professionals there to make connections. Like many his age, though, his cell phone was ever-present in his hand.

Carriage. Standing straight, making eye contact, the young man’s body language was clearly engaged. His nervous habit of rubbing the top of his head when thinking quickly was not on the lists, but it didn’t detract from his overall message of confidence and competence.

Handshake. When shaking hands, it was clear this young man had practiced, his grip was startlingly firm, the shake brief, and the eye contact steady. The hard grip merely emphasized his enthusiasm to meet everyone.

Introduction. Caught up in conversation, the young professional would often forget to give his excellent elevator pitch to introduce himself until midway through a chat.

Generosity. Did you guess? The gentleman was genuinely pleased to meet everyone at the event, offered ideas and information freely, and added value to every conversation he joined. He spoke highly of past and present employers, and showed interest and engagement when it was his turn to listen.

Every senior professional and hiring influencer in the room took notice of this young programmer, knew what skills he possessed, and had made a mental note of the job he was seeking. He wasn’t necessarily the most talented person in the room, but he stood out because he was generous with his time, attention, and knowledge. All of them agreed they would enjoy working with him. That, by definition, is a stellar first impression!