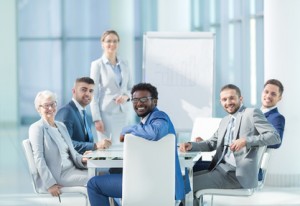 We live in a unique period of history, not because four generations are all working in the job market together, but because the differences between those four generations has been studied and categorized in detail for decades. Why not put that information to use in your work life? From bridging generational gaps between team members, to learning what appeals to an age group of hiring influencers, increasing your understanding of a large group of colleagues and team members can only make you more effective. Here’s a fast generational rundown on the backgrounds, experiences, and work styles of the four generations in today’s work force:

Nicknamed “The Greatest Generation” in the U.S., this group weathered deep recessions and 2 world wars. Despite hardships, they built and rebuilt entire nations at an astonishing rate. They are loyal to their organization, having grown up expecting to work for a single employer for life. The Traditionalists still in the workplace are nearing retirement and have earned respect for the amount of change (both societal and organizational) they’ve weathered. Formal in dress, speech, and relationships, they are individually ambitious, focused on climbing the ladder and are status-oriented. Ambition with respect for superiors/management is key, and job titles are very important to this group.

Named for the uptick in births after WWII, this generation was responsible for massive social changes including shifts in music, civil rights, and labor law. While the generation before them may have built the world, this generation changed the way we live in it. Causing all that change affected them deeply, leaving this group with an optimism and a belief in the power of hard work. This generation worked longer hours than previous groups and have a difficult time with work/life balance, often allowing work to trump family or personal time. Still somewhat formal, they collaborate well, enjoy mentoring team members, believe education and growth over a lifetime, and are ambitious for their organization or team over self. This generation values personal communication such as face-to-face interviews and phone calls over “impersonal” communication such as email or text.

This generation was the most studied as they grew, as both scientists and a generation of parents wondered how the social changes of the Boomers would affect them. This generation grew up during times of financial and social stress, forcing them to become quite independent at an early age, which led to an entrepreneurial spirit. Generation X saw the beginning of the digital age, leaving them with a nostalgia for simpler times while gaining the benefits of increasingly complex technology. Because of their early independence, they tend to respect skill and competence over seniority, value the individual over the group, and focus on work/life balance…in fact, they created the term! They are committed to getting the job done, but not at great personal sacrifice like the Traditionalists or Boomers. This generation is flexible with technology, results-oriented, and tend to excel at negotiation and compromise.

Sometimes called Millennials, this generation is as large as the Boomers, and poised to make changes of their own. Raised by parents committed to not repeating the “benign neglect” of their own childhoods, they have been more closely parented and consciously raised than any other generation in history. They welcome diversity of all kinds, are highly optimistic, and have been raised in a digital age that allowed them a global reach for education, friendships, and viewpoints. This is a group who are individually ambitious without losing a focus on team or organizational goals. Generation Y respects proven authority, seeking mentorship from those with skills and experience, while being less conscious or respectful of unearned status such as age or simple seniority. They use technology effortlessly, challenge rules and the status quo, and embrace change and speed as vital to success. A friendly, highly connected group, Millennials are casual in both dress and manner in the workplace, mixing social and career connections easily, and are equally comfortable being mentored as mentoring.

Put this information about the four generations to use when interviewing to target your interviewers generational work style and interest. Use the insight on the job, as a way to lead more effectively. Learn to promote your strengths to hiring influencers of different generations during the job search.  And use the knowledge to help you deepen connections to network contacts of all ages, understanding someone’s motivations and values can bridge the generational gaps.