The first is a cover letter in reply to an advertisement. In this document, you clearly portray you are the number one candidate and generate intrigue and excitement from the reader, clearly highlighting the reasons why you are the perfect candidate, eloquently ramping up by asking for the interview.

The second letter is used to introduce yourself to an executive recruiter. The key ingredients you must have in this letter are: The job title you are looking for, and be specific; Your willingness to relocate, and if so, where. Again, be specific; Your willingness to travel and how much travel time is acceptable; Lastly, provide an executive recruiter with the precise information on the positions and industries you are targeting.

The third cover letter is called ‘Direct mail’. This is a specific targeted letter addressed to a person who could be your boss or your boss’ boss at a company on your target list. The contents of this letter revolves around not asking for a job, but asking for an informal meeting to build a relationship and discuss your desire to be employed by this organization. 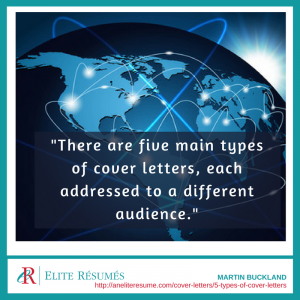 Next, there’s the networking cover letter. In this case, you are introduced to a potential company through a lead. Be eloquent in your introduction. Mention the lead generator in the letter and explain in detail the benefits to both parties in meeting. Perform due diligence and focus your letter on the benefits you will bring the company if hired.

Finally, the fifth cover letter is what I call a ‘Paying cover letter’. Even in good economic times, there are numerous potential employers experiencing difficulties with their business. It could be the lack of productivity and low staff morale or maybe poor revenue generation, high staff attrition, or a dire need to expedite a radical shift in operations due to underperformance. When you come across companies hurting, this is your opportunity to place a business case before a career influencer, who could hire you to resolve their pain.

With these five cover letters, you are now prepared to explore all opportunities that are available and heighten your intrigue with a career influencer. Good luck and happy job hunting.